A Prayer Against Witchcraft Workings 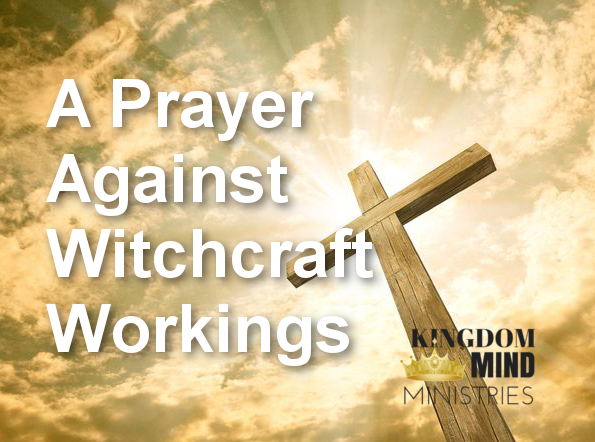 I stand in my spiritual right with Holy authority as the called out of God on earth for the purposes of destroying the works of the devil and proclaim salvation to all who would adhere. I stand in my spiritual right to proclaim liberty, purity, righteousness, holiness and the fire of God from, heaven’s altar, to abolish on earth, all forms of witchcraft, evil curses and dark occult practices that has caused persons to emotionally suffer, experience the abnormal, confusion of mind, insane thoughts, suicidal promptings, loss of focus, sleeplessness, tiredness, irritation, irrational anger and dark spells, to be bound, in the name of Jesus. I command them to be casted out the windows and doors of this building in the righteous blood of Jesus. I command the dark occult forces to release their hold on innocent victims and I bound them and force them back to the sender five-fold, so he/she may be taught that there is no other gods but the Lord, our God only, and him shall all heaven and earth serve.  Every knee shall bow both things in heaven and on earth at the name of Jesus. Jesus is King of King and Lord of Lords, even as he returns. He is hailed the Son of Righteousness and of His Kingdom there will be no end. His kingdom is established with purity of power and is against forces of dark manipulations. The Son’s power is supreme and no other gods can fight against him. Other gods will be defeated like Goliath’s god and dashed to the floor like Dagon and be openly humiliated and defeated like the Baal cults.  By the blood filled basin and power of Jesus, I disallow any further operations of any soothsayer, sorcerer, witch, witch doctor, leviathan spirit, pressure and heaviness spirit to further frustrate things in this environment.

The blood of Jesus demolish dark stubborn pride and actions of blasphemies, false idols, false religions and doctrines inspired by demons, In the name of Jesus, I proclaim in the power of God, the God who delivered the prophet Elijah, Elisha and Samuel, who fought these same familiar spirits and gained the victory, I pray and command in His holy authority they be fettered, bound in the heavens and on earth. In the name of Jesus, bind these dark workers and evil works that were sent out, from them, be destroyed, canceled, eliminated, crushed and broken off. Leave! Now! In the name of Jesus. Every incantation, spell using words, dark manipulations and unclean spirits to loose from the people and be casted into the waters in the name of Jesus. Every portal and evil gate that has been opened by dabbling with evil, leave, disappear and be barred from coming back into this building, in the name of Jesus. I wipe clean with the blood of Jesus the walls, windows and every room in this building.  Cover and smear the anointing over every point of access with God’s Holy fire from his altar.  When evil see the manifestation and purifying power, it is reminded of the lake of fire which burns forever and ever, and into it, evil will be forced. Evil will not work nor stay where God has sanctified and set up for a Holy dwelling for himself. For the Son of God has sealed his authority since the foundation of the World. The blood of Jesus will cover and cleanse mankind from the way of disobedience and rebellion. I sanctify this building and atmosphere in the name of Jesus. There shall be no carved image or idol worshipped, for they do not behold the blood of righteousness of the only begotten Son of God.

I celebrate the blood of Jesus because it gives us access to forgiveness, righteousness, the kingdom of God, purity from devilish works, it unleashes power to destroy the works of the devil, evil and demon activity. I celebrate Jesus blood for there is life in the blood, the blood gives physical life, spiritual life and eternal life. When the blood in the Old Testament was sacrificed, it brought the worshipper closer to God and his presence gave them confidence, victory and praise. In Jesus, we have redemption through his blood. “For this is my blood of the covenant, which is poured out for many for the forgiveness of sins”. When we pray the blood of the Lamb, let evil works and death Pass over us. The blood of Jesus was offered as the unblemished Lamb of God, with it, it purified our conscience from dead works, so that, we may serve the living God. I proclaim aloud, without holiness, no one can see the Lord. I declare and decree the eternal, everlasting blood of Jesus be poured and dashed against the portals and gates of demons and their activity. I decree every gate operating through satanic influence be shut down, barred and sealed by the power in Jesus’ name. Through the blood of Jesus, I command the portal of demon sightings, terror, fear, hallucinations, anxiety, phobias, fright, spells casted in foods, bewitched rooms, hexed clothing, words, written words, trinkets, safe-keepings of occult symbols, mixes, stains, movies, games and books to be bound from unclean working and loosed into the waters of the deep, right now, in the name of Jesus.

I bruise and break all witchcraft attacks against my mind, soul and body in Jesus’ blood. The blood that poured from his head, face, eyes, hands, feet and pierced side on the cross at Calvary. I Command it’s negative and uncomfortable affects to lose at night, be expelled from sucking my strength, and crushed and eliminated out of my conscious and sub-conscious mind. I release it now; and speak health over my body. I command a release of a surge of energy, strength and life into my spiritual man and woman. I decree the gates witchcraft held in its power are abandoned, broken, unhindered and unmanned in Jesus death and burial.  And loosed in His resurrection. In Jesus name, AMEN.

Can I Get What I Need?